We know that running ads when your customers are more likely to buy improves business outcomes like conversion rates and ROI, but now Quartile has the data to prove it.

This summer, nearly 200 advertisers participated in our new hourly optimization feature beta, and the data is super exciting. During the month of July 2021, we saw daily conversion rates improve by nearly 5%, while advertising’s cost of sales dropped by more than 10%.

The combination of increased frequency of conversion data and artificial intelligence-powered optimizations can make thousands of daily updates to Quartile client’s ad campaigns. We now know that these updates caused a steady decline in ad spend as a cost of sales as the system finds cost-saving opportunities while increasing the total sales volume. 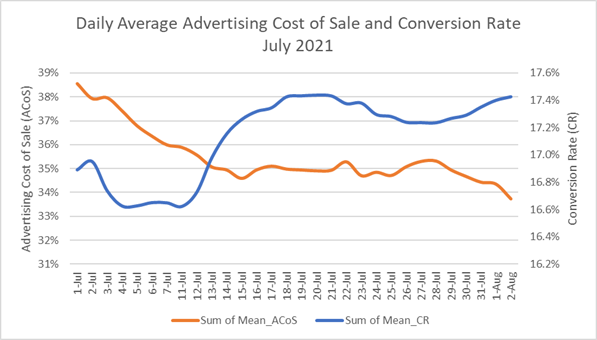 Not surprisingly, we see a similar pattern in the average click and cost-per-click data as well. In the first week, both the clicks and conversion rates dip slightly as the system learns about the typical buying patterns of shoppers for specific products. After the first seven days, we see the total clicks rise, while average conversion rates start to rise after about ten days.

These improvements occurred regardless of product category and campaign optimization target, proving that increased data frequency helps to improve sales and ad effectiveness. 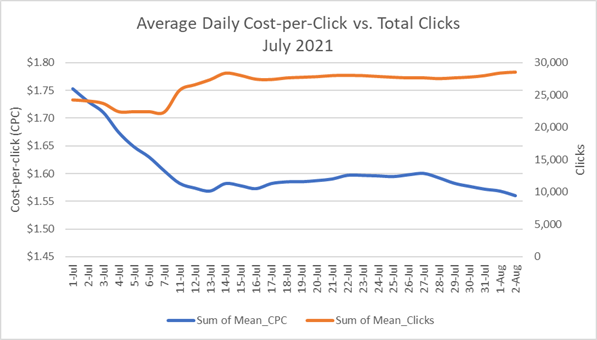 Great, how can I activate hourly optimization for my campaigns?

Learn more about how hourly optimization works by watching our Friday Feature webinar on the topic! Current Quartile clients can schedule a call with their account manager to see how this feature can positively impact their existing campaigns today, and new sellers can schedule a demo with one of our experienced reps now! 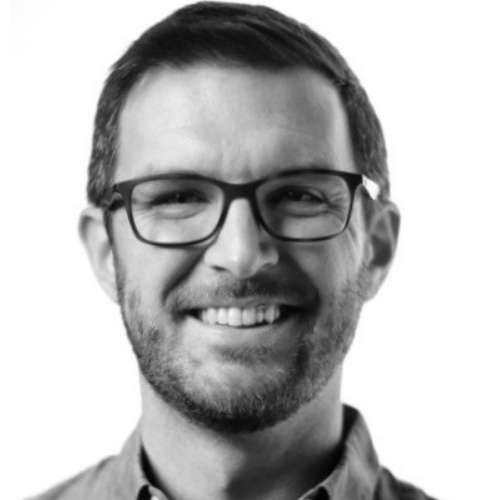 What is AI-powered campaign automation and optimization?

END_OF_DOCUMENT_TOKEN_TO_BE_REPLACED

How Amazon’s Ad Business Could Threaten Google and Facebook

It’s easy to see how Amazon.com Inc. threatens the world’s retailers. But..

END_OF_DOCUMENT_TOKEN_TO_BE_REPLACED

Hourly Optimization: What's the best time to advertise on Amazon?

The simple answer to when to advertise is when your buyers are shopping. Today, advertisers buy ads by the time they think their buyers are tuned in to media, a common tactic across TV and the web..

END_OF_DOCUMENT_TOKEN_TO_BE_REPLACED

Hourly Optimization: What's the best time to advertise on Amazon?

The simple answer to when to advertise is when your buyers are shopping. Today, advertisers buy ads by the time they think their buyers are tuned in to media, a common tactic across TV and the web..

END_OF_DOCUMENT_TOKEN_TO_BE_REPLACED

The New Age of E-Commerce Attribution

As human beings we like to ponder how things began, especially things that ended well. Big Bang Theory or Adam and Eve? The chicken or the egg? Did Al Gore really invent the Internet? And of..

END_OF_DOCUMENT_TOKEN_TO_BE_REPLACED

Ecomm’s New Normal: The Good, The Bad, and The Promising

The profession of marketing has always been known for being both intensely competitive and intensely collaborative. Prior to Covid, many marketers relied on a wealth of conference opportunities to..

END_OF_DOCUMENT_TOKEN_TO_BE_REPLACED

Amazon has launched a new program to encourage adoption of Amazon Attribution and to give credits to sellers that are using off-Amazon advertising campaigns like Google Shopping, social media or..